During open surgery, doctors rely on their sense of touch to identify the edges of hidden tumours and to locate hidden blood vessels and other anatomical structures: a procedure they call palpation.

But during minimally invasive surgeries the ability to examine tissue through touch, called palpation, is lost. Instead, surgeons must manipulate the tissue with long, narrow instruments and rely on visual images from tiny cameras. But engineers in the United States, the United Kingdom, and elsewhere have designed new tools to help restore a surgeon’s sense of touch. 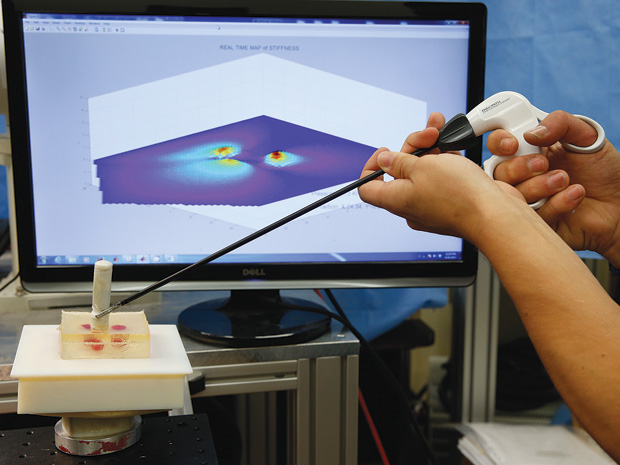 The devices, dubbed palpation probes, are designed to be used laparoscopically and can detect changes in the stiffness of tissue. Tumours are harder than normal tissue, so they can be detected with a combination of pressure sensors and spatial positioning measurements. The readings are used to create a three-dimensional stiffness map that shows surgeons the margins of tumours.

In order to provide the benefits of palpation to minimally invasive surgery, a team of engineers and doctors at Vanderbilt University headed by Pietro Valdastri, assistant professor of mechanical engineering and medicine, has designed a special-purpose wireless capsule equipped with a pressure sensor that fits through the small ports that surgeons use for what is also called “keyhole” surgery.

Once in the body, the surgeon can grip the capsule with the jaws or wire loop on the end of the laparoscope he or she is using for the surgery and press the end of capsule against the target tissue. As the surgeon taps the capsule in different places, it sends information about its position and the force being applied to a computer that uses the data to produce a false-colour map of the tissue stiffness. This map can reveal the location of tumours, arteries and other important structures that the cameras can’t see because they are covered by a layer of healthy tissue.

It works like this: The capsule’s pressure-sensing tip is used to gently indent the tissue. The magnetic field sensor and accelerometer track the depth of the indentation, along with its position relative to a stationary magnet nearby. Each point of contact transmits information about the stiffness of the tissue at that point. Using an algorithm to fill in any unexplored area, the computer creates a 3-D color-coded map that displays the tumours.

It might not be long before feeling around inside the body during surgery is considered old-fashioned. The new generation of surgeons are not doing a lot of open surgery, so they’re not used to palpation. For those surgeons, computer-generated tissue maps might be all they need to “feel” a tumour.